Some Alternate Realities to consider…

What if Wales had been offered to the Jews as a homeland? 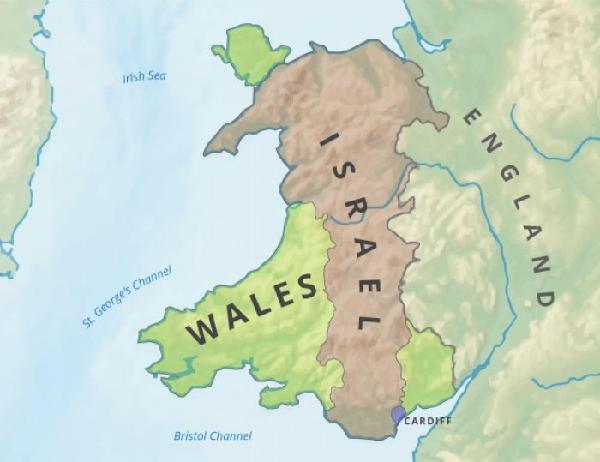 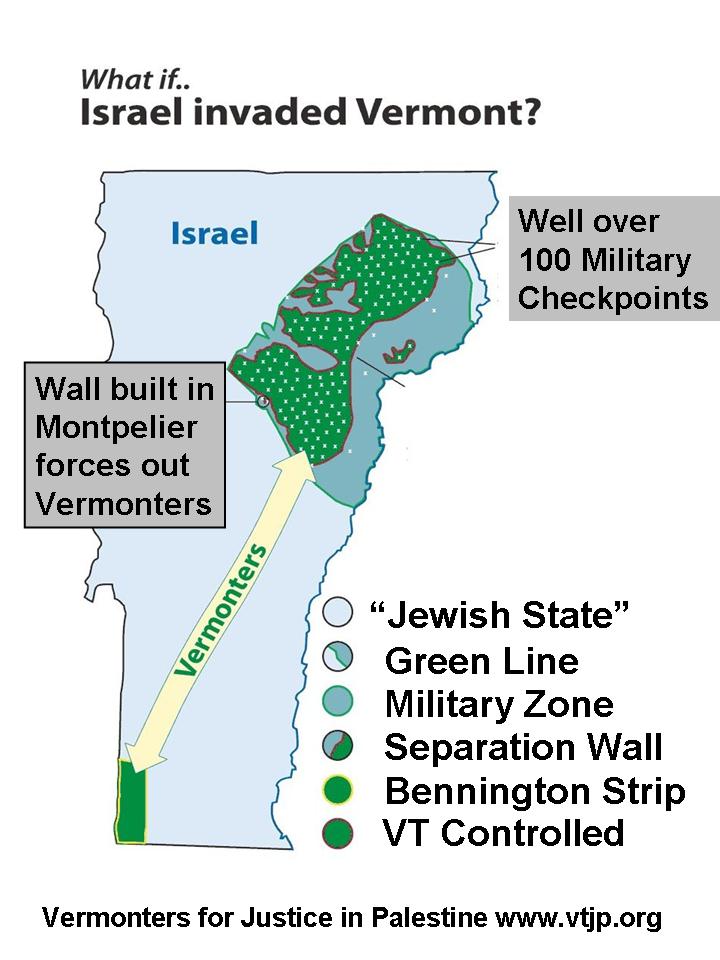 About the Vermont Map:

Areas for all regions are drawn to closely approximate the relative areas of corresponding regions in the Middle East. The state of Vermont is three-quarters the size of the original Mandate of Palestine established by the British under the League of Nations following world War I.

Following the war and ethnic cleansing of 1948, Israel claimed 78 percent of this territory and refused to let three-quarters of a million Palestinians refugees return to their homes. Since the Six Day War of 1967, Israel has maintained an illegal military occupation and colonization project in the remaining 22 percent of the original Palestine: the occupied Palestinian Territory.

The route of the fence-wall in the northern territory (red line) is derived from the completed sections of the separation barrier that Israel is building in the Palestinian West Bank, as well as from the Israeli government’s plans for the remainder of the project.

The number of checkpoints depicted in the northern territory conservatively approximates the relative number of stationary checkpoints maintained by the Israeli army in occupied Palestine. The Israeli military also erects mobile checkpoints and mounds of rubble and dirt to block Palestinian roads, and imposes curfews, closures, and a complex and arbitrary system of internal travel permits.

The descriptions of Montpelier and the Connecticut River Valley represent the current situations in Jerusalem and the Jordan Valley, respectively, where "Judaization" campaigns have caused thousands of Palestinians to lose their homes, their legal residency, or both.

The injustice depicted by this map is supported in the Middle East by the US Congress and the Obama administration, who continue to give Israel more than $3 billion in taxpayer’s money annually in military aid.

What if Vermont were Conquered, Occupied and Colonized by Israel?

Imagine that the history of Vermont had followed the same trajectory of conquest and colonization as that of Palestine. In the mid-20th century, 78% of the state is conquered by Israel to establish a Jewish state. A few decades later, after another war, what remains of Vermont falls to Israeli forces, and hundreds of thousands of Vermonters begin living under military occupation. Over time they are forced into resource-poor, walled-off enclaves with the least useful farmland, denied access to major water resources, stripped of their civil rights, subjected daily to military violence, and trapped by checkpoints on all major travel routes. In further violation of international law, Israel demolishes thousands of homes in the Occupied Vermont Territory to build housing complexes for Jewish settlers, who are given generous subsidies, come and go as they please, and are protected by one of the world’s most advanced armies.

What would you do? And would Ben & Jerry’s cut business deals with the occupier and scoop ice cream for the settlers?

Palestinian Loss of Land Since 1946

What if Israel Occupied Burlington, VT?

It’s hard to get accurate information: Seven Days has been shut down; two editors have been replaced at the Burlington Free Press; Kevin Kelley has suffered a questionable bicycle accident trying to cover the situation at the checkpoints. Power has been shut off from Sovernet, Together.net, and Burlington Telecom.

Movement is severely restricted. Passports are required at the Main Street, Riverside Avenue, Route 7, and I89 checkpoints, and there are mile-long backups on all routes. Within city limits, all major east-west streets are restricted to permitted drivers and vehicles, and many businesses have been severely affected. To control movement in and out of a particularly troublesome area, razor-wire now surrounds the Old North End.

Life is hard in occupied Burlington. More than 400 homes have been bulldozed or claimed via eminent domain to be used for other purposes, leaving many homeless. All public schools are closed for use as detention centers. There have been sporadic reports of torture in these facilities, but no contact is allowed with families, so details are scarce. Burlingtonians out-of-city will not be allowed to return to their homes, as these dwellings are needed for a selected out-of-state population. Though schools are closed, no day care is available; many have lost jobs taking time off to care for their families. Running water and electric power are limited to 3 hours/day and all telephone service has been suspended. Police stand by as the more affluent attempt to appropriate by force goods and services from their less well-off neighbors. Those with extensive bank holdings have watched money and valuables taken from vaults by armed officials to support the expenses of the occupation and the construction of the South End hotel and government theme park complex.

Not surprisingly, public health has precipitously declined. All community and backyard gardens have been poisoned by occupiers and the Intervale shut down; a food emergency is fast approaching as City Market and Rite Aid have closed, and the Food Shelf sees no more donations. Burlington water is being diverted to Shelburne and Williston.

Health care has not been able to keep up. At least 40 people have died at checkpoints in the last month, unable to reach Fletcher Allen. Both BFD and St. Mike’s ambulances have been fired upon, and two EMTs have been killed insisting on getting their patients through checkpoints. Hospital supplies are running low, and the destruction of its water tower by F16s has severely affected operations. Medicine is increasingly unavailable, and its importation into the city restricted.

There is little hope for political relief. All Independent and Progressive city councilors have been arrested, and Council meetings are being held without them. Mayor Weinberger has been targeted for assassination if necessary. All city paychecks are on hold until further notice. The Peace & Justice Center has been shut down, its staff arrested, and demonstrations have been met with violent responses from the authorities, using of illegal gases and live ammunition. The curfew has been extended, and people on the street or at their windows have been shot. Landmines surround the lake to prevent escape by water. All calls from other state, national and foreign governments have been rebuffed, as authorities assert that this is not the time to discuss key issues. It is promised that some of these restrictions will be lifted, pending correct results of the next election.

An unimaginable dystopian fantasy for us, but a compendium of real daily experience for Palestinians, with all mechanics and ammunition funded by US tax dollars. Is this really how we want to spend our money and our moral and political capital?