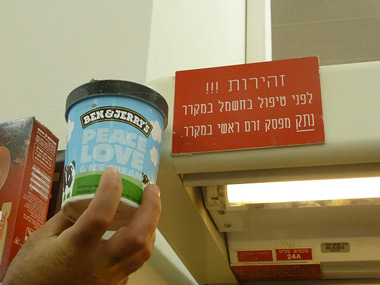 This photo was taken in a supermarket in Gilo – an illegal Israeli settlement in occupied East Jerusalem – by an activist who documented the sale of Ben & Jerry’s ice cream in the settlements of Gilo (pop. 28,980), Pisgat Ze’ev (pop. 39,748) and Ma’ale Adumim (pop. 35,673), and in the industrial park of Mishor Edomim, which services Ma’ale Adumim.

Ben & Jerry’s also Caters to Illegal Israeli Settlements
In August, 2011, an Israeli Jewish activist working with us contacted Ben & Jerry’s factory in Israel, by e-mail and telephone, and confirmed that the company delivers ice cream to Israeli settlements in the occupied territory. Here is an e-mail communication, translated into English, between an employee at the factory and the Israeli activist, discussing arrangements for an ice cream cart to travel to the Israeli settlement of Ma’ale Adumim:

B&J Employee: Thanks for writing. Our ice cream cart comes with 5 flavors to choose from, glasses, wafers, ice cream toppings, 2 stewards and all accessories. The cost for 250 people (free distribution); 3,500 [NIS (Israeli Shekels), or $919 US] including VAT. Attached is a list of flavors. I’ll be happy to answer any questions.

B&amp;J Employee: Yes, the cost of transportation is 250 [NIS (Israeli Shekels), $65 US]. This is because we come from Be’er Tuvia (near Kiryat Malachi) to Ma’ale Adumim.

Israeli Settlements are Illegal Under International Law
Israel’s settlements in the Palestinian Territory violate Article 49(6) of the Fourth Geneva Convention, which declares that “the Occupying power shall not deport or transfer parts of its own civilian population into the territory it occupies.” The commentary to the Convention states that this provision was intended “to prevent a practice adopted during the Second World War by certain powers, which transferred portions of their own population to occupied territory for political and racial reasons or in order, as they claimed, to colonize those territory. Such transfers worsened the economic situation of the native population and endangered their separate existence as a race.”

Ben & Jerry’s business in illegal Israeli settlements also violates its obligations under the U.N.’s “Norms on the Responsibilities of Transnational Corporations and Other Business Enterprises,” which asserts that corporations “shall not engage in nor benefit from war crimes, [or] crimes against humanity…” nor take actions that obstruct or impede economic, social, cultural, civil and political rights.

[Citations for the references above are in Our Report on Ben & Jerry’s business practices in the occupied Palestinian Territory.]

The Israeli supermarket chain Shufersal distributes Ben & Jerry’s ice cream at stores both in Israel and in illegal settlements in the occupied Palestinian Territory.

The map at left, with dots denoting the locations of their stores, was displayed in their store in Mishor Adumim (an industrial zone that services one of Israel’s largest settlements, Ma’ale Adumim). Notice that it depicts Israel and occupied Palestine as one state. Palestinians under occupation are not allowed to enter most Israeli settlements, so the supermarkets in those places only sell Ben & Jerry’s ice cream to Jewish settlers.